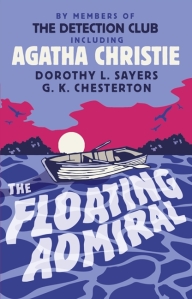 “The one thing that has been lost with the passage of time is the sense of fun that used to be associated with crime fiction,” current Detection Club President Simon Brett writes in his Foreword to the 2011 80th anniversary edition of The Floating Admiral. I beg to disagree. There is quite a market for light hearted mysteries, which still deal with murder and other such crimes, but are very funny, fun to read books. Think Diane Mott Davidson, Laura Levine, Sookie Stackhouse and M.C. Beaton.

Still, his point about detective fiction in the Golden Age being primarily about the fun of solving puzzles holds true, especially with regard to this book. If you’re a major mystery buff like me, The Floating Admiral is definitely worth checking out. Written by the members of the Detection Club 80 years ago (which included such authors as Agatha Christie, Dorothy L. Sayers and G.K. Chesterton), this is more a fun exercise by the club than a serious detective story. Floating Admiral highlights the “sense of fun” Brett mentions in his Foreword by turning detective fiction writing into a game. Essentially, each member of the club writes a chapter, then passes it on to the next member in line. The only rules are that each writer must have a solution in mind and write a chapter towards that solution and that each writer’s solution must take into account all the difficulties presented in previous chapters. As Dorothy Sayers says in her Introduction, this is more difficult than it sounds: what one writer thinks makes a certain solution obvious makes the next writer think of a completely different solution. Essentially, the story gets more and more convoluted as it goes along, and I must admire Anthony Berkeley, who had the unenviable job of writing the final chapter. He had to make quite a few leaps in logic to tie up all the loose ends, but he did it.

The best part was probably all the solutions suggested by the various writers at the end of the book. Agatha Christie’s was, true to form, probably the most unexpected, and certainly the funniest. Several writers wrote their solutions in point format, showing how they struggled to tie everything together, and one even admitted, “I am, frankly, in a complete muddle as to what has happened, and have tried to write a chapter that anybody can use to prove anything they like.”

So, read it not because you want to be dazzled by a confounding mystery with an elegant solution. The solutions are mostly far from elegant, and usually require giant leaps of logic. Anthony Berkeley’s attempt, the “official” solution to the mystery took up probably a quarter of the book in his attempt to explain everything.

The Floating Admiral is a valuable piece of detective fiction history. Read it for the utter sense of glee palpable in the writers’ struggle to find a solution that fits everything. Because there is glee, and lots of it. These great mystery writers had fun writing it, and I had fun reading it.