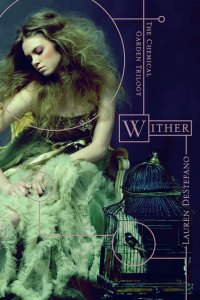 First, kudos to Lizzy Bromley, who designed such a captivating cover. The softness of Rhine’s dress contrasted with the edginess of the geometric shapes wonderfully captures the story’s blend of romance and science fiction.

Wither takes place in the mid- to late 21st century. Humans have discovered a cure for cancer and have created a generation of children (called “first generation” in the book) who are completely free from viruses and other illnesses and who are “practically immortal.” Unfortunately, succeeding generations are genetically cursed with an illness that kills males at age twenty-five and females at age twenty. To keep the human race going, girls are kidnapped and forced into polygamous marriages. Sixteen year old Rhine, the protagonist, is one of them, kidnapped by a scientist, Housemaster Vaughn, to become a wife to his son Linden.

The story reminded me of a mix of Suzanne Collins’ Hunger Games trilogy, Margaret Atwood’s The Handmaid’s Tale and Kazuo Ishiguro’s Never Let Me Go. Focusing mostly on Rhine’s emotions and her relationships to her “sister wives,” the servant Gabriel, and Rhine’s twin brother back home, Wither is nowhere near as political as Hunger Games or Handmaid’s Tale. It does touch on interesting issues – society is divided between those who want to keep looking for a cure and the “pro-naturalists” who believe the human race should just be allowed to die out. The interesting thing about that is that it is those who are searching for a cure – seemingly the more sympathetic cause – who kidnap girls like Rhine and perform experiments on children.

I love Lauren DeStefano’s characters. They are all incredibly complex and, I believe, are the major reason Wither is such a good book. Rhine is a complicated heroine. She vehemently wants to escape her marriage and return home to her brother. However, even as she falls in love with Gabriel, she also develops sympathy, and even affection, for Linden, who she realizes is also as trapped in his lifestyle as she is. Housemaster Vaughn, the primary antagonist, commits horrible acts for a noble purpose — to discover an cure for the illness and therefore save his son. Linden, who has forced three women to marry him, appears mostly a pawn in his father’s plans, and has a tragic love story of his own. Gabriel, who becomes Rhine’s primary ally, also appears resigned to his life with the Vaughn family, and therefore not as motivated to escape as Rhine is. None of the characters are completely sympathetic or completely unlikable, and this makes them all more engaging.

Wither is a teen book, but it definitely has adult appeal as well. Because of their shortened life spans, Rhine and the other teenage characters are remarkably mature. However, because humanity hasn’t adapted to these shortened life spans, in many ways, the teenagers in this book are still very much teenagers, vulnerable, emotional, and lacking the jadedness and experience of adults. The world in Wither forces teenagers to become adults, and DeStefano beautifully depicts the struggle that comes with this.

The ending is a bit anticlimactic, especially compared to the rest of the book, but it does set up the promise for an interesting sequel. I definitely recommend Wither, and I’m definitely keeping an eye out for the rest of the trilogy.