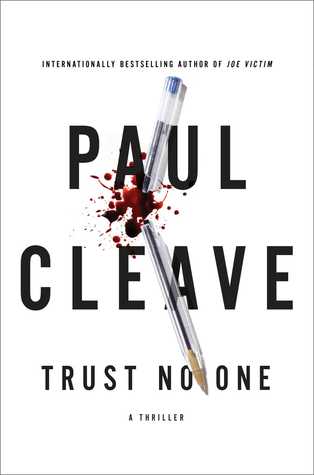 Jerry Grey, a crime fiction writer with Alzheimer’s, is convinced that the murders he wrote about are real, and that he is the one who committed them. The plot thickens when he learns of other murders not in his novels, ones he may have committed and forgotten about. Is Jerry a killer? Is he guilty of the murders he remembers doing, those he doesn’t remember at all, and those with victims he doesn’t even recognize? When he can’t even trust his own memory, how can he tell what is and isn’t real?

Paul Cleave’s Trust No One is a fantastic page turner that keeps you guessing and second-guessing yourself throughout. We see the story mostly through Jerry’s eyes, and so end up as uncertain as he is about what actually did happen. There’s an added layer of complexity with Jerry’s writer persona Henry Cutter, who isn’t a pseudonym so much as a frame of mind Jerry puts on when he writes his crime novels. The book includes excerpts from Jerry’s journal, chronicling events since he learned of his diagnosis, and whenever a situation gets too emotional, Jerry copes by turning the pen over to Henry. Is it possible that Jerry doesn’t remember the murders because it is actually Henry committing them? Midway through the book, a friend of Jerry’s named Hans steps in to help Jerry find the truth, and I was so caught up in the confusion around Henry’s potential role in the murders that I wondered if Hans was even real, or if he was simply another personality in Jerry’s psyche. (Jerry’s wife mentions not trusting Hans, but never actually talks to him directly.) We’re so entrenched in Jerry’s head that we experience how confusing his reality is, and it’s difficult not to slip into the paranoia and distrust Jerry feels towards everything and everyone around him. To me, that’s the sign of a great thriller, and kudos to Cleave for creating that effect.

The major hiccup for me was the ending, which confused me with all the big reveals. I’m a bit unclear about the motive and logistics behind some of the murders, and about whether or not one of the murders was a pure red herring or actually had a connection. It felt like there were so many twists and turns that they didn’t all quite fit neatly into the truth. The final chapter felt unsatisfying, though inevitable, and honestly I wish some of the characters (the police, the neighbour, the care facility staff) showed a bit more smarts throughout the novel than they actually did.

Trust No One is a heckuva thriller to dive into and immerse yourself in. Set aside a few hours to delve into Jerry Grey’s world and enjoy the ride.

Thank you to Simon and Schuster Canada for a (signed!) copy of this book in exchange for an honest review.

So I come home on the Friday of a long weekend, and at my door, I find this:

In the box is an invitation to join Penguin Random House Canada in #BingeReading this weekend. And what a binge this will be! 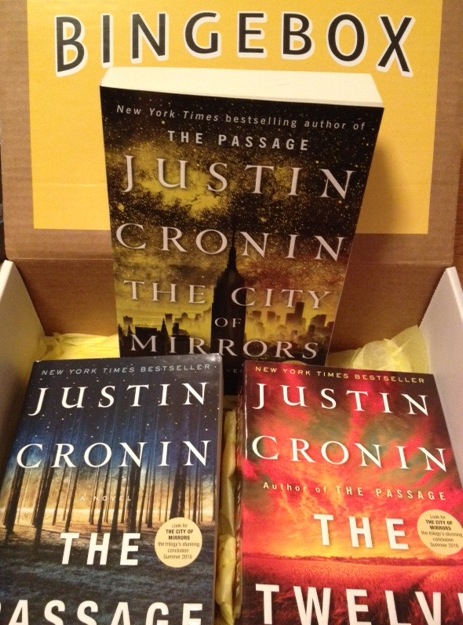 For fans of Justin Cronin’s The Passage trilogy, mark your calendars! Book 3 The City of Mirrors will be on sale this May 24th. I loved the first book so much that I took all 800 pages of its hardcover version around with me on the subway, and I can’t wait to revisit that world and find out what happens next.

This has also got to be one of the coolest marketing pieces around. What better antidote to a busy workweek than one thousand, nine hundred and thirty-six pages of pure, unadulterated reading bliss?

And just in case it’s past  my bedtime and I still can’t put the book down, they’ve even included a pretty in pink reading light!

And as if all this wasn’t quite enough of a bookish binge, I also happened to receive this book for review earlier this week:

I adored the first book in the Hogarth Shakespeare series, Jeanette Winterson’s The Gap of Time (based on The Winter’s Tale), and Shylock’s infamous speech in The Merchant of Venice has long been my favourite Shakespearean monologue, so I’m really geeking out over this. (Also, I just discovered a video of David Suchet as Shylock delivering this very speech, so I’m just in total geek heaven right now.)

Now, if you will all excuse me, I think I’ll spend the rest of this long weekend wrapped up in a warm, cozy blanket, popcorn and candy at arm’s reach, and lost in the world of one among many good books. 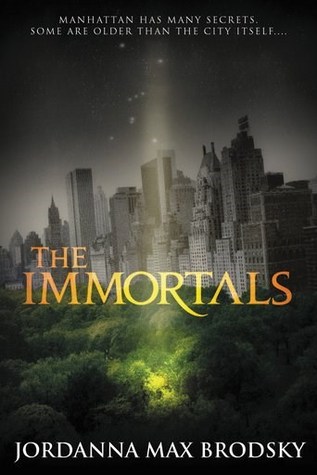 In The Immortals, the first in Jordanna Max Brodsky’s Olympus Bound trilogy, the goddess Artemis is now living in Manhattan as PI Selene DiSilva, who rescues female victims of abuse and punishes their abusers. When she arrives too late to save a murder victim, she vows to exact revenge on the murderer. Also on the hunt of the killer is Theo Schultz, the victim’s ex-boyfriend and a professor of the classics who notices that the murder has the markings of an ancient Greek ritual.

The Immortals is a nerdy fun read, a Greek mythology of The Da Vinci Code. Theo and Selene’s investigation reveals ancient artifacts, arcane rituals, and a series of murders that somehow have mythological significance. The Greek gods and goddesses at this point have left Olympus, and are fading in strength as their relevance to the contemporary world fades. Gods like Apollo (God of Art and Music) and Dionysus (God of Wine) are still going strong, but others like Selene as Goddess of the Hunt and Demeter as Goddess of the Hearth are fading away as hunting becomes less popular and the hearth is replaced by electric heating. Selene’s search for the murderer is complicated by her realization that she seems to be getting stronger with each death. Worse, her mother Leto is dying, and Selene must face the possibility that if this ritual renews the power of Greek gods and goddesses, the murders may be what is needed to save her mother’s life.

The murder mystery is fascinating, and I particularly geeked out over the scenes in the American Museum of Natural History. I also love the relationships between the characters — Selene’s pain at her mother’s impending death, and the estrangement between her and her twin brother Paul (Apollo) ever since an incident over two thousand years ago. (Readers more familiar than I with Greek mythology may know what happened; I found out a bit later in the book and found it fascinating.) There is also the attraction between Selene and Theo, which she feels the need to fight, partly because she has vowed to remain eternally chaste and also partly because of a long ago heartbreak with another man, Orion. Theo is just a total Robert Langdon type, who is sweet and dorky and prone to going into lecture mode when explaining particular aspects of the crime scene.

If you like Greek mythology, arcane puzzles and nerdy murder mysteries, The Immortals is definitely worth a try.