This is such a good book! Unfinished Business is an intelligent and well-balanced discussion on work/life balance. I love how Slaughter eschews a one-size-fits-all solution and instead talks about how this could work given a range of circumstances.

I thought the reframing of the question on work/life balance to re-evaluate how much caregiving should be worth is really smart. Slaughter also gives a broad understanding of the term “caregiving”, applying it equally to caring for a child, an aging parent, a spouse, a friend or whatever other type of loved one. Too often the discussion on work/life balance focuses on working mothers, and as a single, child-free woman, I’m glad to see my own experience finally included in this discussion.

Slaughter as well gives equal importance to working dads and distinguishes between making men equal partners in the home and having them help with household duties (the first accords them responsibility and a sense of ownership.) She also points out that same sex couples are unable to rely on traditionally held social notions of the gendered division of labour, and so their experiences demonstrate how bread winning and caregiving can be distributed equitably between both partners regardless of social assumptions about gendered capabilities.

Lots of food for thought in this book, and Slaughter raised a lot of interesting points. Hopefully this book sparks discussion on these topics and makes us all re-think how we see careers, competition and caregiving.

Thanks to Random House Canada for a copy of this book in exchange for an honest review. 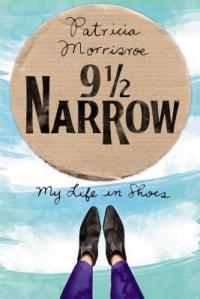 9 1/2 Narrow is touching, funny and uplifting, a charming memoir about significant events in author Patricia Morrisroe’s life told through the framework of the shoes she wore at each incident. It’s fascinating to realize just how symbolic a choice of footwear can be.

I love how she credits meeting her husband to the shoes she wore — she happened to be tying her laces at the same time he passed by — and then later details how his collection of a certain type of athletic shoes became a cause of strain in their marriage. I also especially love the section when she wore a pair of fashion forward shoes at a new school to be cool only to discover that the popular girls were all wearing a completely different style — the incident turns into the type of “mean girl” misunderstanding that must have been much more painful than the author’s lighthearted touch leads us to believe. Having grown up studying in an all-girls’ school, where we had to wear uniforms, I know all too well the importance of choosing the right accessories, and the right pieces of clothing over which we had some degree of control (i.e. shoes).

My favourite part of this book by far is the relationship between Morrisroe and her mother, told through the lens of their constant battles over footwear. It’s a relationship other women may remember with their own mothers or daughters, and again, the lighthearted comedic touches of heated debates over shoes belie the deep bond between them. The tone of these segments stand out as well — in a mostly amusing series of anecdotes, there’s a poignancy to her encounters with her mother that tell a tale far beyond a story of shoes.

The book reminded me of a shoe-related skirmish I had with my own mother, over the height of the heels I could wear to my high school prom. Having been constrained by a school uniform all my life, I had Disney princess-ish visions of glamour for prom night, and those, in my mind, equated to high heels. I wanted four inch stilettos, my mom wanted nothing higher than an inch. We compromised with 3 inch chunky heels, and I was feeling like a glamourous princess for maybe the first hour, until I realized why my mom had been so adamant about low heels. Limping around at the end of the evening, I was grateful that she’d forced me into rounded toes and chunky heels.

That memory is one in a series of many memories of high school and of my mother, yet even now, whenever I see a pair of four inch stilettos, or otherwise wobble around in heels wishing I were in flats, I remember my mom and my high school prom. It’s fascinating, the impact footwear has on us, and Morrisroe captures this feeling wonderfully in her memoir.

Whether Morrisroe is arguing with her mom over a particular type of shoes, or falling in love with her husband over another pair, shoes play such a big role in our lives, and our choice in footwear tells so much about us. There are shoes I associate with particular friends or family members, and shoes I associate with particular moments in my life. And by framing her life in shoes, Morrisroe succeeds in drawing us into her life, and helping us visualize precisely the type of footwear that got her to where she is today.

Thank you to Gotham Books for a copy of this book in exchange for an honest review.

Apart from a brief stint of Dr. Phil fandom, I’m not a big fan of self-help books. They usually strike me as saccharinely optimistic at best, and rigidly authoritarian at worst. This may explain why I was both intrigued and slightly turned off by Gretchen Rubin’s Better than Before.

Rubin explores the idea of habit formation, and proposes that we all fall into one of Four Tendencies, depending on how we respond to obligation: Upholders stick to both external and internal obligations, Questioners do things only when it makes sense to them, Obligers need external accountability, and Rebels do what they feel like. According to Rubin, each of these tendencies can lead to success — the trick is to understand your own tendency and structure your habit formation along those lines.

I admit bristling at these classifications when I first read about them, mostly because I realized I was a textbook Obliger. In North American society, today, where individuality and self-governance are so highly prized, it seemed to be that Upholders were the most suited to success, and being an Obliger was the surest path to failure. Ironically, just a few pages after I felt this, Rubin writes that of the four Tendencies, Obligers are the most likely to dislike their own tendency.

Fortunately, as I read on, Rubin spoke at length about her sister — an Obliger — who is diabetic and who succeeded in getting her blood sugar down by changing her eating and exercise habits. For Rubin’s sister, it helped for her to tell co-workers that she no longer ate cupcakes, because they then helped hold her accountable to that resolution.

Rubin also gives various examples of friends and family members with other Tendencies, who successfully formed new habits based on her techniques. Honestly, I think her friends and family were a lot more polite than I would have been, if someone offered to make me a “guinea pig” in their habit formation theory. Rubin claims to understand that what works for her (an Upholder) will not work for most other people (most people are either Questioners or Obligers), but apart from a nominal split second of reluctance, she seems to have no problem dictating habits that her friends and family should form. Still, it is gratifying to know that even Rebels and Questioners can be successful at forming habits.

Also of interest are other classifications Rubin posits. One can be a Lark or an Owl (work best at daytime or at night), as well as an Abstainer or a Moderator (give up chocolate entirely or limit oneself to a square of chocolate a night). Again, alongside the Tendencies, these are useful in determining how to form new habits. For example, Rubin’s sister couldn’t commit to giving up all carbs to help her blood sugar, but she committed to abstaining completely from French fries, and that in itself has improved her health.

Rubin also calls us out on relying on loopholes — e.g. the “tomorrow” loophole, where we plan to begin a new habit “tomorrow” and in the meantime, splurge for today. Or the “false choice” loophole, where we set up a false dichotomy between two competing values that may not necessarily be in opposition (e.g. I can’t exercise because I work so hard).

I wish Rubin had spent more time talking about strategies for the other Tendencies, rather than relying on personal anecdotes sprinkled throughout. I also wish she had expanded the scope of the habits she chose to speak about — she mostly focused on habits she deemed important for herself, e.g. a low carb diet and exercising.

Finally and most problematically, I thought that at times, she framed concepts and redefined terms in a way to suit her arguments. For example, she says we can’t use rewards to help us with our habits because then we’re doing things for the reward and not viewing the habit itself as a reward — this strategy may work for Upholders, but likely not for everyone. Worse, she then says we can have treats, as long as they’re not tied to a particular habit or seen as a reward — this strikes me as just semantics, and is disingenuous. For example, when someone suggests that Rubin give up her diet soda habit to be healthier, Rubin emphatically declares that diet soda is her treat, and because she doesn’t smoke and barely drinks, she is entitled to it. I couldn’t care less if she drinks diet soda or not, but her tone struck me as defensive, and makes me wonder why her drinking diet soda as a treat is justified whereas her sister eating carbs beyond French fries is given the side eye.

Still, I thought the classification of Tendencies was useful, as were the details on loopholes and strategies we use that may hinder our habit formation. Rubin’s strategies for herself will definitely not work for me — she may thrill in structuring her days to such an extent, but I would chafe under such rigidity (e.g. scheduling a time each night for her and her husband to talk about their day) — but understanding that I’m an Obliger will definitely help me with my own habits. For example, it now makes sense why my whole strategy of going to the gym without a fixed schedule didn’t work for me — I enjoy the solitude of working out alone, but may need the accountability of a group class where people know me and would know if I skipped a class or two. Whatever your Tendency is, you can form a strategy for success, and Rubin’s book — particularly the first few chapters — can help you form that strategy.