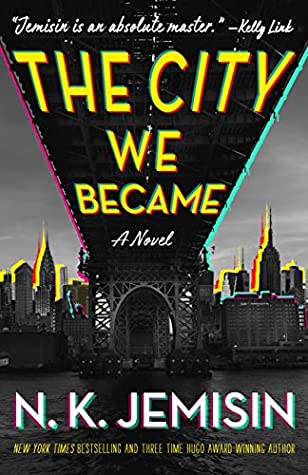 The City We Became is a full-out, unapologetic, in-your-face homage to New York City. In it, five New Yorkers are ‘reborn’ into the living embodiments of the five NYC boroughs. They must band together and find the living embodiment of New York as a single, wholly encompassing city, so that they can defeat the Woman in White, an other-dimensional being determined to stop New York City from being ‘born.’

I’m a huge fan of N.K. Jemisin’s Broken Earth trilogy. I find her books brilliant — they’re multilayered and reveal more with each re-reading. The City We Became is such a book. It made me wish I grew up in New York City, or even that I just lived there now. The characters felt real, but I think they will also resonate much more strongly for those with an emotional connection to NYC.

First, there’s Manny (Manhattan), the brash and charming ethnically ambiguous newcomer who finds power in a cab ride and in dollar bills. There’s Brooklyn, the badass Black city council member who used to be a rapper and who lives in a brownstone with her dad and daughter. There’s Bronca (Bronx), the Lenape arts centre administrator, who’s the only one of the five that was ‘reborn’ knowing the group’s history and purpose. There’s Padmini (Queens), the mathematician from Chennai who is in NYC on a student visa. And finally there’s Aislynn (Staten Island), the timid white woman who is scared to take the ferry into the city, and who grew up with a lot of prejudices about immigrant and persons of colour.

Each of these characters is so vividly drawn, both as human beings and as allegories for the boroughs they represent. I love how each of them draws power from something that’s rooted in the spirit of their respective boroughs (e.g. the brownstone for Brooklyn, the apartment complex of immigrants for Padmini), and how all of these come into play in the story.

I also love how the villainous Woman in White sinks her tentacles into the city both literally and figuratively. Literal tentacles destroy the Williamsburg bridge and cause a traffic jam on FDR Drive, but more significantly, the Woman in White also buys up real estate to turn into condos or coffee shops. In one scene, the heroes recognize the Woman in White’s influence when they see a Starbucks where a beloved community space used to be. The Woman in White also goes after Bronca’s art centre by offering a huge sum of money for the centre to display racist and misogynistic artwork by a group of alt-right white men. The symbolism can feel a bit heavy handed, but on the other hand, everything also somehow works together, and as someone who lives in a city, so many of the story’s touchpoints struck a chord in me.

On one level, The City We Became is a gripping urban fantasy, where the city’s champions/avatars fight to protect their home from an alien invasion. But on another, deeper level, it’s also about the way cities grow and develop identities. Jemisin’s New York City is not a land area with buildings and cars, but rather a living, breathing entity. I love that her vision incorporates the distinct identities of each borough, while still bringing them together into a cohesive, yet never singular, whole. Jemisin’s love for the city shines through with every page. I loved the New York City she portrayed, and I can only imagine how much more powerful this book would be for actual New Yorkers.

Thank you to Hachette Book Group Canada for an egalley of this book in exchange for an honest review.