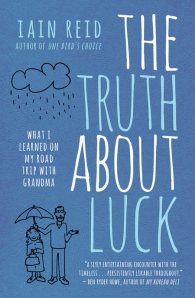 Iain Reid has a gift for getting right into his readers’ hearts. In One Bird’s Choice, he made us fall in love with his quirky, hilarious parents, as well as with a certain bird named Lucius. These characters make an appearance The Truth About Luck as well, but Reid’s second memoir shifts the author’s focus to his adorable, utterly loveable 92-year-old grandmother.

The premise of the book is practically guaranteed to make anyone with a grandmother go “Awww…” When Reid’s brother reneges for the first time on a joint birthday gift for Grandma, Reid decides to take his grandmother on a week-long road trip, gifting her with something far sweeter than a quirky portrait: his time. Unfortunately, for reasons that are unclear to me (finances? lack of planning?), the much-anticipated road trip turns instead into a staycation in Kingston. I do wish I understood better why Reid opted for a staycation instead, especially since the original plan had allowed for the possibility of the grandmother paying for the trip. As it is, I felt bad for Grandma, who’d looked forward to a road trip for months, and had possibly even brought her swimsuit. Worse, Reid admits he had no idea how to entertain his grandmother for a week — a cringe-worthy admission, though admittedly, we’ve all been there.

Reid is endearingly self-aware, unflinching in his portrayal of himself and unafraid to make fun of his own quirks. At times, he tries a bit too hard at self-deprecation — people likely aren’t paying as much attention to his treatment of Grandma as he imagines — but this as well is rather sweet, a heightened concern for his grandmother’s well-being. A wonderfully wry passage near the beginning of the book sums up Reid’s self-deprecating humour pretty well:

I called a friend to see if he had any ideas for me, tips on how to inject some carefree mirth into the trip. He reminded me that I wasn’t really the fun or adventurous one in our group. […] When pushed for which one in the group I was, he used the word egghead and asked what the opposite of an adrenaline junkie was. I wonder if I can offer Grandma a sherry first thing tomorrow morning? [p. 60]

Fortunately for Reid, his grandmother is such a sweet, gracious woman that she genuinely seems as excited over a week in Kingston as she originally was over a road trip. Grandma is the heart of this book, and Reid’s prose is a lovely, loving tribute. The staycation offers him the chance to listen to his grandmother’s stories about her past, a rare opportunity with a woman more accustomed to asking about her grandchildren’s lives than speaking about herself. In a coffee shop, as his grandmother speaks about her life during World War II, Reid notices the other customers busy with their books, laptops and mobile phones, and feels the urge to command them all to listen. Grandma’s life is far too interesting to ignore.

My own 89-year-old grandmother, who has always been a feisty, chatty woman, has recently begun exhibiting signs of dementia. She has difficulty remembering events and recognizing people, and is most comfortable speaking in Chinese, her first language and, unfortunately, one I don’t speak myself. Reid’s book makes me think of all the stories I may now never have the chance to hear, and makes me wish I’d paid closer attention all those times my own grandmother spoke about her past. I remember our trip to China, and my grandmother’s attempts to teach me Chinese, and wish I could remember more of what she taught.

This book then, perhaps more than any road trip, may just be the best, most precious gift Reid could have given his grandmother. Not only will he forever be able to remind himself of her stories, but he has also immortalized her past for people who have never even met her. Time and again, his grandmother frets that she is boring him with her stories. Time and again, Reid assures her that he is fascinated. And thanks to Reid’s masterful prose, so are we.

Thank you to House of Anansi for a copy of this book in exchange for an honest review.

2 thoughts on “Review | The Truth About Luck, Iain Reid”