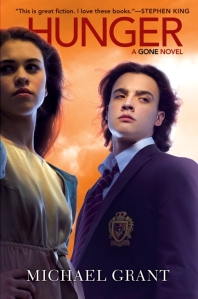 Michael Grant’s Gone series just keeps getting better. In the second installment, Hunger, the kids in the FAYZ have run out of food, some of the normal teens have drawn battle lines against the kids with powers, and the mysterious entity called the Darkness keeps sinking its claws even deeper into Lana and Caine. Sam and his crew have discovered fields with vegetables, but there are giant killer worms guarding their territory (sounds ridiculous, but they’re actually quite horrifying… and gross).

Worse, kids in the FAYZ don’t want to work. “I’m just a kid” becomes a common refrain, understandably frustrating Sam’s team, all of whom are kids themselves. My sister, who introduced me to this series in the first place, commented that she found it hard to believe that only Sam’s friends are stepping up, and the rest are content to whine about their hunger and play video games all day. She understood about the younger kids, but wouldn’t the tweens and teens at least band together and help organize something? My initial reaction had been that this situation seemed very realistic, but my sister raised a good point — is Michael Grant, and are readers like me, underestimating the potential for maturity in young adults?

Then again, it’s not just that it was only Sam’s friends stepping up; it was just that those who did step up naturally became part of Sam’s “government.” One of the characters also said something that struck me as logical: the kids have no incentive to do hard labour, because they know that even if they do nothing, Sam’s team will make sure they’re fed. One of my favourite secondary characters from Gone, Albert, comes up with what I consider a brilliant solution: he sets up a market economy, first a barter system, then eventually establishing a currency using McDonald’s Monopoly money. Astrid’s response to this disappoints me, considering how brilliant she is supposed to be: she tells Sam to shut Albert down, saying they now have the opportunity to establish a class-free society, where money doesn’t exist and therefore no one is richer than anyone else. Would socialism have worked in the FAYZ? Possibly, but only if established from the very beginning, before they ran out of supplies and most kids show no motivation to work “for the greater good.”

What I love most about Hunger is that we see the vulnerability in so many of these characters. Sam’s heading for a breakdown: “I’m not their parent,” he constantly tells Astrid, to which she reminds him, “They’re just kids,” who need parenting. Sam, of course, is a kid himself, and even adults would prefer to focus on the bigger issues like finding food or preparing for Caine’s next attack rather than have to deal with complaints of who pulled whose hair and who called whom stupid. Lana, as the Healer, feels a similar pressure. Kids come to her with everything from bloody noses to loose teeth to skinned knees. She’s like a celebrity hiding from paparazzi; everyone demands her attention, and all she wants is privacy. Astrid’s brilliance reveals its cracks. While Sam is the official leader, Astrid definitely holds the power, and a lot of her decisions (shutting down Albert’s enterprise, curtailing Quinn’s initiative in going fishing) reveal short-sightedness. I can understand why some of the kids in the FAYZ have grown resentful. I especially love the bigger role other characters play: Mary’s eating disorder grows much worse, Albert and Quinn reveal economic savvy, Edilio takes a much stronger leadership role, Brianna, Taylor and Dekka become essential to battle, and even Caine reveals his softer side.

Gone was thrilling and action-packed, with characters you grow to admire. Hunger is even more thrilling, and makes these characters even more real and tangible to us. Fantastic sequel, darker and more introspective than the first, Hunger takes the FAYZ kids from trying to survive a battle to taking the first steps in creating a long-term, sustainable society.